March was the launch of my new blogsite and weekly column, “Speaking Truth from Clint Decker.” It has been received well by the small-town newspapers that have been part of our column family for years. The editor from the Sapulpa Herald in Oklahoma was encouraging, “We very much like Clint’s column and the twice a month timeline is even better. We have published each and every one of his columns for years without missing a one. He does well, writing from the Christian viewpoint and our readers here in Sapulpa have [given] very positive feedback.” It has also been doubly encouraging to get tremendous support from my own local newspaper, The Clay Center Dispatch, who wrote, “Thank you very much for giving us the opportunity to have additional articles at all times.” They have published every column I have sent going back to March.

Each time I prepare to write, I seek the Lord in prayer and His Word while observing the culture, and what is happening in people lives. These are the titles in March and April. They Killed The Son of God to Bury The Truth, Authors of Our Own Chaos, When a Nation is at War, Living in an Age of Deception, Is Covid Still Keeping You Out of Church? It’s Time to Come Back, Persevering Through Perilous Times, Has The Resurrection Lost Its Relevance to You? God’s Call to Raise Obedient Children, Pt. 1, God’s Call to Raise Obedient Children, Pt. 2.

It is humbling to see how God is blessing this work. The Psalmist wrote, “Clap your hands, all peoples! Shout to God with loud songs of joy.” (Ps. 47:1) To God be the glory! I am so grateful to newspaper editors that choose to publish my columns that are provided free of charge. Many of them see it as a personal ministry to do so. 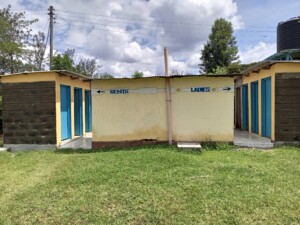 In January, we sent our final gift to help the Manna Bible Institute and School of Missions in Kenya, so they can complete their bathroom and shower construction project. As of print time, they have finished constructing two buildings and are nearing completion of remodeling on a third. In two buildings, they have constructed three new women’s bathrooms and three new men’s. They have also added one new women’s shower stall and a men’s too. Each of the bathrooms have all the plumbing fixtures needed as well as painting and tiling to finish them out. They have also built an area to provide four new sinks for hand washing. For all this they have built the infrastructure for sewer and water needs.

It has been a great joy to give to MBI and see the excellent work they are doing. When completed it wil 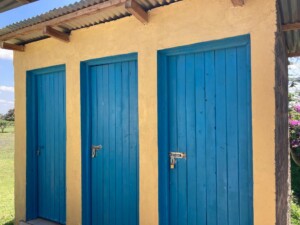 l be a tremendous service to the students and faculty of the school for years to come. This is our way of helping MBI train and send out pastors and evangelists to preach the gospel and plant churches in rural areas of east Africa. The Apostle Paul wrote, “You will be enriched in every way for all your generosity . . .” (2 Cor. 9:11) I feel enriched in how we have been able to help this vital school in Kenya.

Enclosed are just a couple photos, but if you go on Great Awakenings Facebook page there are more photos, along with a video.

Earlier this year three friends of mine left this earth and went on to heaven. They were all tremendous men of God.

Paul Fleener died on February 1, leaving behind his wife, Shirley. He served as a Great Awakenings charter board member in 2004. He had a deep love for Christ and was committed to use all his talents, experiences and resources to advance God’s kingdom. Even though he was retired from a career as a Washington lobbyist, he continued to use all his gifts to serve Jesus. One way that fascinated me, was his passion for the Jesus Film Project. For years, he rallied his local church to support the translation of the Jesus Film into various languages. Through Paul’s efforts in his retirement years, new translations of the Jesus Film were produced and shown to people who had previously never heard of Christ. As a result,

thousands have heard of Christ in far-away lands because of his labors. What an inspiring legacy!

Dr. Wayne Caldwell died on February 2, leaving behind his wife, Joan. I first met Dr. Caldwell in the mid-90s, when he was my professor during my ministry studies. Eventually, I approached him to be one of Great Awakenings charter board members and in 2006, to be editor of my newspaper column. For 17 years, every month we talked on the phone to edit the column. His last edit was in August 2021, when he was 97 years old. The writer I am today and the blessing of my column ministry, I owe to Dr. Caldwell’s influence.

Earl Pickard died on February 12, leaving behind his wife, Trish. He was the first and only person I ever met who was a prayer missionary. He gave himself to God to pray throughout Kansas, the United States and nations of the world. In 2009, he partnered with me to do a prayer training for a major outreach we were doing in Northwestern Kansas. Then in 2016, he partnered with me again for a prayer training with a church in Nebraska prior to a citywide outreach. He was one of the most unique people I have ever met. A godly man with a fire in his heart for Christ and great faith to go, do and say whatever God wanted.

“Precious in the sight of the Lord is the death of his saints.” (Ps. 116:15) These three men of God were models in how to live for Christ. I am so glad I had a chance to learn from them and be influenced by their life.

Every month I continue my work of preaching in small and rural churches. They are an important part of the body of Christ and play a vital role in their small communities

Thank you for your prayers, encouragement and support of the work of Great Awakenings. If we can pray for you or you have been encouraged by this newsletter, please let us know.