cultural shaping years of the United States and world in recent times.  It began in January with retired NBA legend, Kobe Bryant’s sudden death.  News of his passing impacted the world.  In February, President Donald Trump became the third President to be impeached by the U.S. House of Representatives.  Then in March the Covid-19 pandemic swept across all 50 states in America, shutting down almost the entire country.  In May, the killing of George Floyd set off a series of lawless riots in major cities.  And in June the Supreme Court ruled that the 1964 Civil Rights Act can be extended to offer protections to lesbian, gay, transgender and bi-sexual people, which will likely have implications for churches, Christian non-profits and Christian run businesses.  And we still have several more months and a Presidential election to go!

In the Book of Matthew, after the disciples questioned Jesus about the end times, Hegave the signs of His return, saying“See that you are not alarmed, for this must take place, but the end is not yet” (Matt. 24:6).  The things happening in our world; the violence and moral chaos, are signs to us of Jesus’ imminent coming and highlights the urgent need to go and preach the gospel in the midst of a growing expanse of spiritual darkness.

In mid-March, like many other organizations, Great Awakenings had our ministry schedule wiped clean due to Covid-19 shutdowns nationwide and across the world.  My international trips to Kenya and Mexico were both canceled.  Some of our scheduled Igniting the Rural Church programs were canceled as well, as were other preaching engagements from March through June.

On a personal side, my wife Kathe, along with her fellow co-workers, all lost their jobs when their organization had to shut down.  It still has yet to re-open.  To be honest, during parts of March and April, I was discouraged and brought to an extreme low point.Yet, God met me in my weakness and filled me with fresh joy, praise and thanksgiving.  He strengthened my wobbly legs of faith.  And when He did, He gave me a message to preach.  It is from Matthew 24:3-14 (What is Happening to our World?  Is Jesus Coming Soon?) where Jesus gave a teaching to His disciples on the end times.  The message has connected with fellow believers in place after place as they are seeing the rise of some of the great troubles Jesus predicted would come before His return.

The first place I was able to deliver that message came Sunday, April 28 at Countryside United Methodist Church,over two Sundays.  The church is less than a mile from our house.  It was a digital fill-in.  Like thousands of other churches, they were unable to meet in person, so they started broadcasting their services on 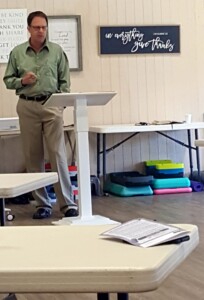 Facebook.On Saturday, a small group came together to pre-record the entire service, then uploaded it to air on Sunday morning.  It was first time I was able to gather with other believers for worship in five weeks.  Refreshing!

Following that, from mid-May through mid-July, God opened wide doorsfor travelling and preaching every week.

A couple of those Sundays during that time period we held our Igniting the Rural Church program.  They were held at Madura Church in Wakefield, Kansas, and Rocky Branch Baptist Church in Rogers, Arkansas.  They were the first two programs of 2020.  Both had hosted it previously and wanted to do it a second time. (R-Teaching at Rocky Branch)

Through all the ministry at different churches I saw firsthand how challenging it is for pastors and church leaders to lead through Covid-19.  Every church is different.  One church I preached at chose to dismiss the Kansas Governor’s orders and meet anyway without sanitizer, masks or social distancing.  In contrast, I preached in another place where the church was highly cooperative with the Governor’s orders with lots of sanitizer, the majority of the congregation in masks and strongly encouraged social distancing.  All churches faced dilemmas over what to do about communion, Sunday School and other sorts of church programming.  It seemed the smaller and more remote the towns were, the easier, but the larger the churches and towns were, the more difficult.

Getting back to Kenya has been an elusive task.  It was first scheduled for December, then rescheduled for April.  Now because of Covid-19 we will be looking at a third scheduling, but at this point we have no idea when.

The plan for April was for me to teach at Manna Bible Institute, which is less than 25 minutes south of Nairobi.  I was toinstruct rural African evangelists on various topics of evangelism.  The teaching would have been coupled with an outdoor citywide crusade reaching up to 5,000 people, along with other preaching and outreach opportunities.

We raised funds to help with the expenses of the trip, planning the crusade and other outreaches.  We wired those dollars to Kenya in late February.  Shortly afterwards, the pandemic hit and everything in the United States and Kenya shut down.

During the global shutdown I contacted Pastor George Muguro, Principle of MBI, and asked how their school was doing.According to Kenyan government orders, all schools were forced to close.  Both public and private.  Consequently, they had to cancel all their classes and conferences that were scheduled.  As the weeks added up, with no end in sight or plan for the immediate future from the government, things became more difficult.  They were unable to pay their staff, other bills, and in the midst of this, were ordered by the local government to make costly repairs to their bathrooms and showers. 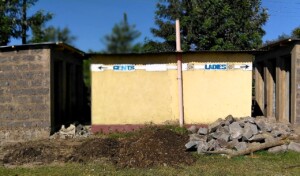 When I learned the state of their situation, I instantly knew what we were to do.  I believed God wanted the funds raised for the trip to be used to help MBI through the Covid-19 crisis.  To let the funds for the teaching and outreach just sit in a bank account, waiting for some unknown time in future to be used, did not seem right.  They had a clear, urgent and immediate need.  I shared the proposal with our board of directors and we all agreed it was the right thing to do.When we contacted Pastor Muguro with our decision, he and MBI were elated, “As I read your email, I stood up and thanked the Lord for His Grace, His Mercy and this financial provision.On behalf of the board of Manna Bible Institute, the teaching staff, the other staff members and the Manna students, we are sincerely grateful for your understanding, and you and your board members for supporting Manna at this time of need.”

In addition to the funds sent in February, more funds were sent in June.  Pastor Muguro and the school have been updating me regularly in how the money is being spent.  They used the funds to help pay staff salaries for April and June, other bills and began construction work on their bathroom and shower project, which will benefit hundreds of students in the years to come.(R-construction work on bathrooms and showers)

RACE AND THE CORONAVIRUS

I have been writing my syndicated Hope for Today column since 2006 and it has always been monthly.  However, due to the coronavirus and the aftermath of George Floyd’s killing I felt compelled to write regular and special columns on these issues, which newspapers were gracious enough to run.  I wrote four columns on the virus: “Where You Can Find Hope During the 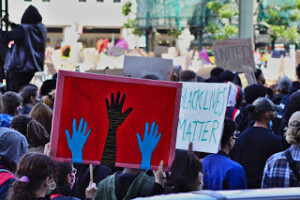 Coronavirus Pandemic”, “God. Our Only Answer to the Coronavirus”, “There’s No Law Against Doing Good.”  I also wrote three columns surrounding racial issues.  “Observations About Chauvin, Floyd and Racism”, “Black Lives Matter Doesn’t Speak for all Black Lives” and “Racial Vandalism in My Town?”  Following two of my columns on race, our town was vandalized with racial slurs on numerous public and private properties.  The crime made statewide news and griped the attention of our community.  There were at least two letters to the editor opposing my columns which ran in our local newspaper.  One person, before his comments were printed by the paper, also directly emailed me.  He made an outlandish charge, stating “If you did not intend for this sort of outcome to your [columns], I would think a firm and public statement condemning these crimes is urgently and quickly needed.”  Obviously racial issues are very sensitive topics at this time in our nation.  Even so, we must step forward and expose error, lift up the truth and point people to the risen Savior as the ultimate answer.

AT THE BED OF THE DYING

Once again God had me at the bedside of someone who was dying.  This time it was a woman who lost her battle with cancer.  Like other situations I have been in, I saw God send in His troops to bring His Word to her before she died.  When I arrived at her home, I saw the local Lutheran pastor getting out of his vehicle.  I watched him share Scripture and pray.  Then as he finished up, another community pastor came in.  He also shared Scripture and prayed.  Additionally, I learned of a third pastor who came to her home a week earlier.  Then there was me.  I proclaimed Christ and prayed with her too.  It was just amazing.  God knows when someone is going to die.  He uses every means at His disposal to be sure they can hear His gospel message one last time before they slip off into eternity and face Him as judge on the other side.

Due to the coronavirus impact on the economy many churches and Christian non-profits have had a drop in giving.  We are no different.  We are below our budget goals for the year, but despite that, the majority of our supporters have continued with us.  Plus, we have seen other supporters generously provide special gifts that have been very helpful.  To help make up some financial shortfalls, I have taken two part-time jobs.  One I started last fall, and another a couple months ago.  These are meant to be temporary, until the ministry can rebound financially.

Thank you for your prayers, encouragement and support.  If we can pray for you or you have been encouraged by this newsletter, please let us know.