On the 15th anniversary of my syndicated newspaper column, I will be making an official name change this fall, as well as moving from a monthly to weekly column.  The Hope for Today name launched the column in 2006 and has served us well.  The new name will be Speaking Truth and comes in response to a major cultural shift in 2020.

The essence of my column from the beginning has been to present what God has to say on any subject or current event and use that to point people to Christ in small town rural newspapers.  In 2020, I became aware that some editors were not running some columns, getting negative letters to the editor in response or dropping it. The editors are the gate keepers of anything getting printed, so it was something that got my attention and put me in prayer.  What has been the main difficulty?  Writing on things editors believe would potentially cause controversy or offend their readers, thus losing subscribers or advertisers.  In our present culture, many things seem to easily offend or cause angry reactions if they are not presented in a way that is deemed acceptable, based on their views.

In March 2020 I wanted to share what God had to say about transgenderism so I wrote the column, When Your Boy Wants to Identify as a Girl.  One Christian editor told me how she does not like to censor, but knew if she ran that column, “it could possibly cause a riot.”  She genuinely feared it could happen.  Outside of that one, she ran every other column I wrote.

In the summer of 2020, I wrote a few articles on what God has to say about racism following George Floyd’s death.  An editor told me they received letters opposing my columns, so as a result, the newspaper staff had to meet and figure out how to respond to the dust up.  In response, they moved my column from the clergy page to the opinion page.  Since then, the paper has been very selective in what they have chosen to run and have refused to run any of my

columns in 2021, except for my January edition.

In late December 2020, I wrote the column, 2020 Elections and The Gospel of Jesus Christ, following the November national elections that were filled with much illegal activity.  I wanted to write on what God had to say about it all and wrote on lying, stealing, deceit, manipulation and evil planning.  Many editors chose not to run the column.

One editor that dropped me stated firmly, “I have noticed more and more this year that Clint’s pieces were starting to reflect a very concerning sway into the political area, but this one really goes there.  We have not run any of his submissions that headed into his ‘easy to determine’ political beliefs.”

Not all editors think alike.  Some will cancel the column based on personal disagreement, but there are a host of others that see their role another way.  One told me with great passion, “My readers need to know the truth.  If I don’t run your columns, how will they know?”  Another said, “We are a small weekly newspaper with a wide variety of readers.  [Clint’s] column fits nicely and seems to be a neutral, non-divisive way to reach readers with spiritual messages.”  One kindly commented, “We appreciate the column. The subject matter is always timely and we are in agreement with the truthful, biblically based [content].”  And another was short and to the point, “I enjoy reading the column and look forward to the next one.”

After reflecting and praying through all this, I knew bowing to the cancel culture and changing the content of the column strictly for the purpose not losing more papers would be unfaithful to God.    However, I did feel a name change, along with more clarity of the purpose of the column was wise, so editors better understand the purpose of my column to avoid any surprises.

Speaking Truth is a name that more accurately reflects my heart and intent of the column.  I want to take any subject related to current events, life or the church and share God’s truth, that people might have the veil of deceit and confusion lifted, and turn to Christ with all their heart for the salvation of their soul.  Proverbs says, “Whoever speaks the truth gives honest evidence, but a false witness utters deceit” (Prov. 12:17).  That is what this column is about.  Speaking what is right and being honest about the issues of our day, even if that should anger some.  But ultimately, I know they are not angry with me, but God, whose Word I seek to lovingly and patiently proclaim.

The construction project at the Manna Bible Institute (MBI) in Kenya that Great Awakenings is helping to fund, has made tremendous progress the last few weeks.  The work started in June 2020, but then paused waiting for more funding.  As additional support came in this year, the work resumed.  There are two newly constructed bathroom facilities (grey buildings) containing six-bathroom stalls with new plumbing and newly installed sinks as well.  There is still more work to be done, with a major focus on renovating the yellow shower house.  These new bathrooms will replace older facilities that were unusable and will eventually be demolished.

This project is a tremendous practical help to the administration, staff and students at the college because they have had to go off campus to use

bathrooms and showers for some time.  Now they will be able to have facilities to use on their own property.  Praise God!

There is just a small amount yet to be raised to complete the project.  If you would like to donate to help finish it, please click here.

Isaiah the prophet wrote, “How beautiful upon the mountains are the feet of him who brings good news” (Isa. 52:7).  The college has been around since the mid-1980s and has had thousands of students from all over East Africa come through their doors.  One reason why we are partnering with them is because of their focus on helping to train rural pastors and evangelists and plant churches in rural African areas.  They have trained and sent out multitudes of beautiful African feet to proclaim the good news.

I had planned to travel to MBI in 2020, but due to Covid-19 that was delayed.  At this point, MBI and I still do not have anything certain planned for the future.  In part because in-person crowd size and gatherings are still limited. 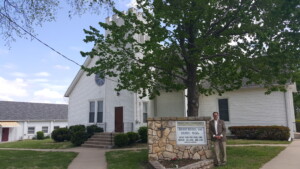 Almost every weekend God has me teaching His Word in small rural churches throughout the north central Kansas area.  I am able to do this because of my involvement with the Manhattan Christian College Pulpit Supply Program that serves small churches, many who do not have a pastor.  Every month I get assigned places to go, often I have been there before, but sometimes they are new places, like the Maple Hill Community Congregational Church.  It was a beautiful church with a congregation that was responsive and attentive to God’s Word.  At the time they were without a pastor and searching for an interim, which is no easy task for a church that runs less than 50 people.

I often ask churches what are some of the needs in their community so I can learn about the church and town.  When I asked the people at Maple Hill, quickly the response was, “The Catholics.”  I said, “The Catholics?”  That was a first for me.  I was expecting drugs, broken families, alcohol, troubled youth or other things.

A chapter of The Society of St. Pius X exists in St. Mary’s, Kansas, less then 30 minutes from Maple Hill.  The Society sees itself as representing the true Roman Catholic church, standing in opposition to the ways of current Roman catholicism.  They have been in St. Mary’s for over 40 years and have been growing steadily as more Catholics seem to reject present catholism and are gravitating toward The Society, especially young catholic families.  They are moving to this area of Kansas, coming from all over the nation.  St. Mary’s has doubled in population, just as other nearby towns are growing too.

All this is causing the small Maple Hill church to ask how they can share the gospel with an increasing number of Catholics around them.  As they seek God’s wisdom, He will show them.  The Scripture says, “For the Lord gives wisdom; from his mouth come knowledge and understanding” (Prov. 2:6).

Every church, every town is different.  God has made each one unique.  It takes prayer, learning, and insight from God to discover the uniqueness of our mission fields, wherever that may be.

Thank you for your prayers, encouragement and support of the work of Great Awakenings.  If we can pray for you or you have been encouraged by this newsletter, please let us know.